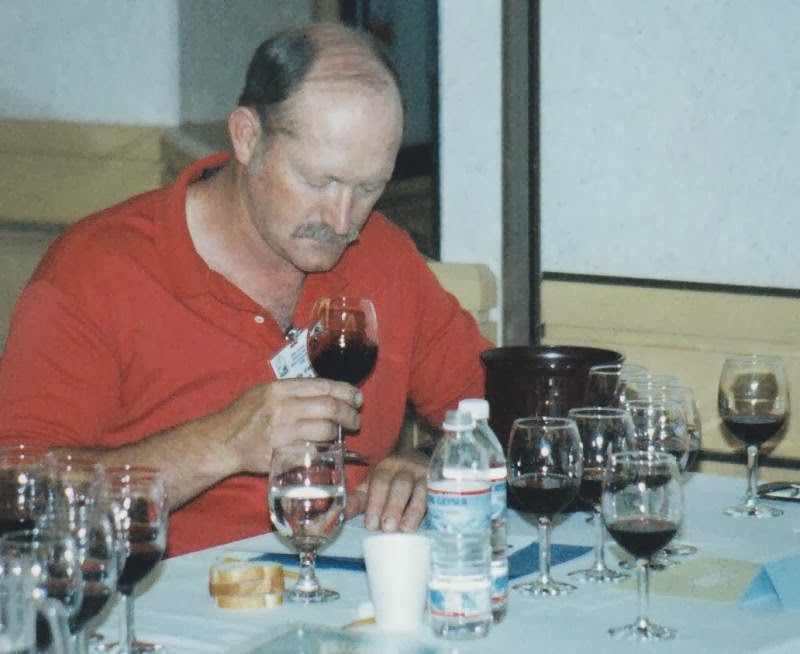 Thomas Houseman - Winemaker, Anne Amie Vineyards
Pinot reigns supreme at Anne Amie Vineyards with Pinot Noir, Pinot Gris and Pinot Blanc forming the heart of our production. Complementing the pinot family is Old-Vine Estate Riesling and Müller Thurgau, planted in 1979.
Our vineyards are located in the rolling hills of the Yamhill-Carlton District and on the steep hillsides of the Chehalem Mountains, both nestled in Oregon’s verdant Willamette Valley.
Our tasting room hosts breathtaking views of our vineyards and the Pacific Coast Range. We look forward to your visit.
ABOUT THOMAS: Thomas’ winemaking career unofficially began in the basement of his parent’s home in Hampton Roads, Virginia. His Welch’s grape juice and orange juice concentrate wines are lost in time, but we're sure they’d be showing well if any remained. Thomas narrowly escaped blindness from this stage of his life and went on to New York City, where he pursued a career in modern dance. Traveling the globe performing was great but it did not get him much free beer. So, he bought a book and taught himself to brew.
With the creativity of a dancer, the eye of a scientist, and the encouragement of friends who loved the free beer, the passion for fermenting reemerged.  Thomas left the stage and went back to school at CSU Fresno in the enology program.  It was there he fell in love with Pinot noir.  And, across the globe he embarked again, first to California’s Anderson Valley, then to New Zealand, and finally to Oregon.  After four years at Ponzi Vineyards, Thomas saw the opportunity to express himself at Anne Amie Vineyards where he is happy he can still use words like balance, grace, fluidity, elegance, power and style- words that once described his dancing, now describe his wines.
In his free time, Thomas still brews, having dragged his equipment across the US. Yoga and running have replaced dance, but winemaking remains the common thread that started in a basement and continues at Anne Amie.

Chef Roy Hendrickson - Executive Chef,  Zimzala Restaurant
About Chef Roy Hendrickson: Chef Roy Hendrickson brings years of Southern California culinary experience as Executive Chef at Zimzala, the vibrant dining destination at the Shorebreak Hotel in Huntington Beach, Calif. Zimzala, which is surfer speak for “one who finds peace with sand between his toes,” invites guests and beach-goers to find their way upstairs to this hidden beach gem, just across the street from the iconic Huntington Beach Pier.
Offering the finest California Coastal Cuisine in a casual, relaxed environment, Chef Hendrickson’s menu will feature traditional, American favorites, all served with an eye towards the area’s laid back beachfront culture. Signature menu items include the Cider Brined Pork Chop with mustard parsley spaetzle and sour cherry gastrique; Grilled Prime Burger with chipotle cheddar, bacon jam, tomato jam, buttermilk roll, crisp leeks, and house made pickles and parmesan-garlic fries; and Pan-Seared Scottish Salmon with Spanish chorizo, hand made tagliatelle, saffron shellfish Emulsion. Menu items range from $9 to $29.
A Southern California native, Chef Hendrickson's love of cooking was born as a child when he would join his grandmother and mother in the preparation of family meals. His first restaurant position was as a server at the Coventry Hill Hotel in England, where he spent his high school years while his parents served as local missionaries. Hendrickson’s first professional cooking position brought him back to Southern California with subsequent work at various local eateries. He currently resides in Huntington Beach with his wife and four children.
Abourt Zimzala: Zimzala refers to “free-spirited people who find peace with the sand between their toes.” We think that definition sounds just about right for Huntington Beach. With daily brunch and dinner, traditional American cuisine, specialty cocktails and a playful ambience, Zimzala’s easy-going nature will restore and relax you.
About Shorebreak Hotel - Sexy-surfer-chic: The opening of the newly built Shorebreak Hotel in summer 2009 launched an exciting new era in Huntington Beach's rich history, bringing a renewed joie de vivre to this Southern California community's relaxed beach lifestyle. Stylishly designed guest rooms feature spectacular ocean views and innovative amenities. The hotel speaks to a sophisticated audience who appreciates the hotel’s progressive beach culture and free-spirited, yet trend-setting ambience. Shorebreak's Zimzala is a popular attraction for locals and visitors, offering California Coastal Cuisine with an emphasis on elevated well-known dishes, beach-inspired handcrafted cocktails, and surf-inspired décor.
Posted by artmartinez91 at 4:33 PM 0 comments