Yes, wine in Malibu. The grapes for our wines are grown not on the famous beach, playground to the stars and surfers' Mecca, but in a scenic valley four miles inland and 1400 feet above the coastal fog. In 1987 Los Angeles businessman George Rosenthal began planting vineyards at his 250 acre Malibu retreat, but only after he spent two years carefully checking soil composition, drainage, and weather conditions to make sure he planted the correct varietals in the most ideal locations on his property. The work proved worthwhile and Malibu Newton Canyon is now recognized as its own distinct AVA (American Viticultural Area) or appellation. Thirty-two acres of hillside vines are now planted in this unique microclimate, where cool evening breezes temper warm, sunny days.
It's an intense undertaking that requires a labor of love. The slopes are steep and everything from canopy management to harvest has to be attended to by hand. The wines are then aged in French oak barrels under the watchful eye of winemaker Christian Roguenant who strives to bring out their unique character. The reds are vinified with limited intervention to highlight terroir and the Chardonnay is made in a Burgundian style yielding a lightly oaked, crisp wine that complements a wide array of foods.
We invite you to visit us at our Malibu Wine Tasting Room that boasts views of the Pacific Ocean and is an amazing location to relax and enjoy the sunset while sipping a glass of your favorite Rosenthal – The Malibu Estate or Surfrider wine. We are located on the Pacific Coast Highway, just 300 yards north of Topanga Canyon and across the street from the gorgeous and inviting Topanga State Beach. We hope to see you there soon where you can enjoy a bottle of wine and taste the flavors of Malibu for yourself. 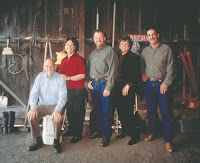 
Jim Young, the oldest son of Robert Young, learned grape farming at his father’s side. Jim now heads winegrowing for all the family vineyards. He earned a degree from the University of California at Davis in plant science with a specialty in viticulture and enology, then in 1975 returned home to Robert Young Vineyards to continue the family tradition of innovative farming. In 1987, he implemented the planting of six-foot-wide vine rows. To create a more balanced vine, he introduced new trellising systems. “These systems open up the canopy and moderate the vigor of the vine,” he explains. “The larger canopy surface area encourages healthier exposure of the grapes to sunlight, which greatly improves the flavors of the wine.”
Posted by artmartinez91 at 12:00 PM 0 comments 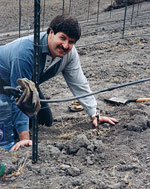 
The Wedell Cellars dream began in the late 1970's when Maurice Wedell began working with a well known French Restauranteur in Los Angeles. During the next ten years with the restauranteur's guidance, Maurice developed a passion for wine. This passion led Maurice in 1988 to move along with his wife Susan, and their newborn son Justin, to the Central Coast of California, an area that produces some highly acclaimed Chardonnay and Pinot Noir. Immediately, the Wedell's planted a small experimental vineyard of Chardonnay in what became the first step in realizing their dream of creating a wine styled after the great Burgundies of France.
Knowing that they would need expert guidance in their quest to create such a wine they sought out John Alban of Alban Vineyards to assist in the management of the vineyard and to make their wine. The first vintage in1994 consisted of one barrel of wine, twenty-eight cases of Chardonnay were produced from their own grapes and from grapes purchased from John Alban. Encouraged by the results in 1994, Maurice and Susan decided to expand production gradually over the next few years by purchasing grapes from selected vineyards in Edna Valley while planting and maturing their own vineyard capable of producing enough grapes for their wine.


In early 1995 four acres of Chardonnay and one+ acre of Pinot Noir were planted on a steep hillside in the southern end of Edna Valley to achieve this goal.  The photograph on the right is that of Maurice planting the first vine in this magnificent vineyard.  Realizing that ripeness has never been a problem in California, a north facing hillside was chosen to delay bud break and increase the "hang time" of the grapes, thus allowing for higher acids and lower sugars than what is normally found in Edna Valley. The Chardonnay was planted at density of 1100 vines per acre and the Pinot Noir was planted at a density of almost 2000 vines per acre. Our Vineyard practice is to crop thin to one cluster per shoot and no more than four shoots per vine. The vineyard began to produce Chardonnay in 1999 and Pinot Noir in 2000. Beginning with the 2000 vintage a watercolor of this vineyard is on the label of all Wedell Cellars Hillside Vineyard wines. TheHillside Vineyard designation on a limited amount of our production signifies the best of our estate grown fruit, typically our Hillside Vineyard designated production is limited to one to three barrels per year of Chardonnay and Pinot Noir. Over the next few years as the vineyard reaches full production the purchase of grapes will be limited to select lots of custom grown Pinot Noir,  beginning in 2004 we began to source fruit for our second Pinot Noir from two separate vineyards in the highly regarded Santa Rita Hills Appellation of Santa Barbara, the 2004 Wedell Cellars Santa Rita Hills Pinot Noir was released in July 2006 and has a new label featuring a grape vine created by well known artist Joanne Beaule Ruggles. In early 2005 three acres of Chardonnay in the Hillside Vineyard were grafted over to Pinot Noir, reducing our estate Chardonnay planting to one acre while increasing our estate Pinot Noir planting to four+ acres, the grafted vines yielded a small crop beginning in 2006.
Wedell Cellars wines have been recognized by various wine writers for their excellence, indeed, one well known wine publication, Decanter Magazine, stated in an article that Wedell Cellars Pinot Noir could easily be mistaken for the finest French Pinot Noir made, Domaine de la Romanee Conti..

In addition to winery events, the Amador Vintners annually sponsor two weekend wine extravaganzas: the “Big Crush” in October, during the exciting fall harvest season; and “Behind the Cellar Door” in March.
Our next major event will be the BIG CRUSH HARVEST FESTIVAL OCTOBER 6 AND 7, 2012 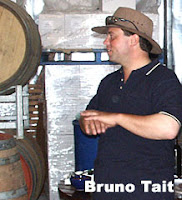 Bruno Tait – Maker of wine from Barossa called “The Ball Buster”
Tait Wines is located at the southern end of the famous Barossa Valley, in a town called Lyndoch in South Australia, and overlooks the spectacular Barossa Ranges. The panoramic view is an ideal setting for enjoying Tait Wines. The cellar door is a place which is relaxed and friendly and where personalized wine tasting can be experienced. Displays at the winery give a working history of the traditional winemaking and viticultural methods.

The owners of the winery are brothers Michael and Bruno Tait, and Bruno's wife, Michelle. They purchased the property in 1994 with the purpose of continuing their family's involvement in the winemaking industry. Although fairly new to the winemaking aspect of the industry, the Tait family has long established roots in the South Australian wine industry. Their father, Giovanni Tait (1927-1997), migrated to Australia from Italy in 1957 to take up work as a cooper in the Barossa. His high skill and craftsmanship in his chosen trade led him to B Seppelts and Sons where he took an active role in the production and maturation of wine in oak casks. He learned cooperage from his father and grandfather before migrating to Australia. The family had practiced the art of cooperage for over 100 years, making and repairing oak barrels used for the maturation of both table and fortified wine. 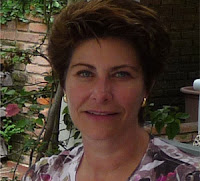 Janet Soderberg - From Altamira in the Uco Valley in Mendoza

Jan is a native of Chicago, growing up in the Northwest suburbs before moving to Denver to obtain a degree in journalism from the University of Denver. Upon returing to Chicago, she attended John Marshall Law School, was graduated, and is licensed to practice law in Illinois. Jan's spent her career in financial services, and before leaving Chicago for Wall Street, she received her M.B.A. from the University of Chicago.
While Jan's name, Soderberg, reflects her father's German-Swedish roots, her interest in wine came through her Italian heritage.
Posted by artmartinez91 at 12:00 PM 0 comments

Paul Kronenberg - President Family Winemakers Organization
Family Winemakers of California advocates the rights and interests of its members to freely produce, market and sell their products, and is dedicated to preserving the diversity of California wine. In fulfilling its mission, the association has sponsored legislation in the past 12 years to expand the ability of wineries, particularly small producers, to compete in the marketplace. Additionally, FWC has taken a leadership role in pushing and funding the litigation strategy to open up domestic markets for direct-to-consumer wine sales. That investment resulted in the 2005 U.S. Supreme Court decision that overturned discriminatory laws in Michigan and New York.  FWC recently prevailed in the 1st Circuit Court of Appeal in its case against Massachusetts's discriminatory production cap law.

David Young - Owner Minassian/Young Winery
A husband and wife, David Young and Amparo L. Young, winemakers and owners.David knew at an early age that he wanted to be involved in winemaking.  He pursued his abiding passion for winemaking at Cal Poly State University in San Luis Obispo, where he earned a Bachelors Degree in Fruit Science.Amparo, like David, has always had a fascination for plants.  During her career she has studied plants at the molecular and biochemical level.  She furthered her passion by earning her doctorate degree from UC Berkeley in Plant Biology.Fate brought these two lives together, one knowing the process of wine making and the other, knowing the plant molecular and biochemical pathways.  David and Amparo have a common scientific background which influences their daily lives as well as their winemaking philosophy.“Our winemaking philosophy is to produce wines in a consistent manner, where the differences between vintages arise only from variables we cannot control such as temperature and rainfall.  In addition, most wines are produced without blending fruit from multiple vineyards.  This minimalist approach ensures that every vintage is representative of the terroir for each vineyard.”