Robert Larson tells us the story behind Rodney Strong Wines and share some delicious wine tips!

http://www.rodneystrong.com/
Rodney Strong was one of the pioneers of Sonoma County’s modern wine industry, an acknowledged visionary who understood the potential that Sonoma’s soil and climate held for producing world-class wines. A successful dancer before retiring and turning to his second love, winemaking, Rodney Strong established Sonoma County’s 13th bonded winery in 1959.

Rodney Strong Vineyards grows and produces wines from grapes grown exclusively in Sonoma County’s finest appellations: Alexander Valley, Russian River Valley, Chalk Hill and Sonoma Coast. Rod was one of the first to plant pinot noir in the Russian River Valley, the first to produce and release a Chalk Hill chardonnay, and the first to make a single-vineyard cabernet in Sonoma County. The winery’s 14 unique estate vineyards represent a perfect combination of varietal selection and place, the unique soil and climate as well as farming and winemaking techniques.

Since 1989, the Klein family, who has been involved in California agriculture for four generations, has privately owned the winery.

Tobin Sharp Talks To Us About Hi-Time Cellars! 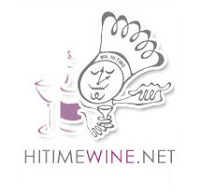 Shortly after opening the store, Fritz’s younger brother Chuck Hanson joined the Hi-Time team. Chuck became interested in wine right away and became the store’s primary wine buyer. Most of the business at that time consisted of distilled spirits and jug wines. Chuck remembers that the first wines to make a big impression on him were those of Charles Krug and Louis Martini.

Harold Hanson, who was in the military overseas at the time, joined Hi-Time after completing his tour of duty. While in the service in Europe, Harold took pictures of wine caves in Burgundy. Bringing the photos back to his brothers, it was decided that they would build a wine cave within the store. Harold became the General Manger for the store, a position he held for over 40 years.

In 1984, the Hanson brothers moved to their present location in Costa Mesa where they built one of the largest underground temperature-controlled wine cellars in the U.S.

The recently re-designed store now has a retail space of 24,000 square feet. They added many new and exotic labels to their selection. Along with their selection of rare wines you will also find hard-to-find spirits and exotic liquors from all over the world. In addition, they offer a comprehensive selection of North American micro-brews along with some of the best beers the rest of the world creates. Their walk-in beer refrigerator offers over 1,000 different beers from 25 different countries. Their walk-in tobacco humidor holds over 400 different cigar brands and sizes, including Davidoff, A. Fuentes, Cohiba, Ashton, Avo and Macanudo, as well as a great selection of pipes and fine pipe tobaccos.
Posted by Erin Farrell at 3:19 PM 0 comments 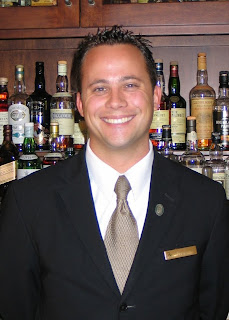 About Troy Smith: Earning the Advanced Sommelier Diploma from the American Chapter of the Court of Master Sommeliers, Troy Smith is a sommelier and beverage manager at Montage Laguna Beach.
Equipped with in-depth knowledge gleaned from more than 10 years in the wine industry, Smith oversees the selection, purchasing and storage of wines for the entire resort. He also facilitates all ongoing staff wine training.
In addition, Smith oversees the ambitious wine program for the resort’s three restaurants, including its signature restaurant Studio’s impressive 2,500 wine selections. To that end, he is instrumental in selecting Studio's approximately 50 wines by the glass; working in tandem with Studio Executive Chef Craig Strong and the Studio sommelier team to present wine pairings for each item on the private chef’s table and tasting menus.
Previously a sommelier at The Phoenician Resort in Scottsdale, AZ, Smith has also served as sommelier at the Ventana Room at Loews Ventana Canyon Resort in Tucson, AZ.
For more info on Montage, go to www. montagehotels.com 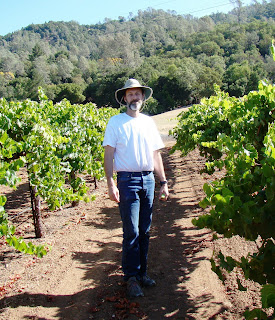 About Fred Scherrer: Fred began making Zinfandel from his father’s vineyard in 1991. The first vintage consisted of 600 cases. Over the next 5 years, Fred was able to slowly expand production of Zinfandel as he continued his ‘day job’ as winemaker at Dehlinger.
In 1997, they were able to expand production to include Cabernet Sauvignon and Chardonnay from the Scherrer Vineyard. This expansion included making the winery a full-time occupation in 1998 and moving into its current location in an insulated metal building near Sebastopol.
For more info on this winery, go to http://scherrerwinery.com!
Posted by Erin Farrell at 11:36 AM 0 comments 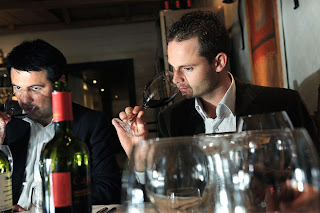 Vinnico Export is a Spanish wine producer and wine export company located in the quaint little Spanish town of Javea, in the province of Alicante. With a passion for Spanish wines and focused team of professionals, we set our goals high competing successfully in the global wine market, with an export success of over a million cases each year throughout Europe, the United States, Canada, Mexico, Japan and Russia.
THE WINES WE'RE TASTING:
Picos Garnacha
Picos Tempranillo
Radio Boca
Tempranillo Flor
Tempranillo Flor Organic Monastrell

About Nicholas: Vinnico Export was founded in 1996 by Nicholas "Nico" Hammeken whose wine industry experience began with the completion of his professional Cellar Master designation in Denmark. He then continued with work in wine production in Germany, France and Spain before moving into the wine trade in England. Nicholas was especially interested in the wine regions in southeastern Spain, particularly the Murcia region. Winery improvements from the 1990's had produced wines that were much more suited to modern tastes.

Nicholas likes to describe the wines we work with as "Tomorrow's Spain". Traditional Spanish grape varietals from old, established vineyards and winegrowing regions are combined with modern viticultural and winemaking techniques to produce fresh wines that emphasize the true characteristics of each grape and each region.

As well as being the managing director, Nicholas is also involved with sales and has a specific focus on Scandinavia. He was also responsible for launching Vinnico Export wines into North America and Japan.

About David: David Tofterup was born in the town of Esbjerg, in the Danish peninsula, in 1975. At the age of 15 he migrated with his family to the Costa del Sol in Spain, and it was here that his interest in the Spanish language, culture, gastronomy and wine took form. Appreciation for quality wine and food has been a passion of David's ever since.

His interest for wines, however, was not just limited to consuming, but rather in the art and technique of winemaking. Moving back to Copenhagen on his own at the age of 18, he graduated from Copenhagen Business College in 1995 and in 1998 he became a skilled wine cellar master and started on his adventures traveling around the wine world. He has worked as an assistant winemaker at prestigious wineries worldwide, including Mont Marçal (Peñedes, Spain), Chateau Lestage-Simon (Haut-Medoc, France), Viña Tarapacá (Maipo Valley, Chile), Foley Estates and Lincourt Vineyards (Santa Barbara, California) and a short experience with Kumala (South Africa).

David joined Vinnico Export in 2001 and created the company's award winning wine collections, Montgó, Flor del Montgó and Aventino as well as well recognized single label wines such as, Tosalet and Creencia. David also has helped importers in creating unique blends for their unique market and has worked with individual wineries to adapt winery blends for international markets. He has also consulted and advised wineries on improvements in both viticulture and winemaking techniques.

In order to keep himself up to date with the latest theories and constant evolution of the wine industry, he has been taking distance courses in Viticulture and Enology with the University of California, Davis.

The Sherpas are an ethnic enclave of about 35,000 Buddhists living in Nepal, but the reason Sherpas are renowned and talked about world-wide is for their elite mountain climbing skills at exceptional altitudes. It was Sherpa Tezning Norgay who led Sir Edmund Hillary on the world's FIRST EVEREST EXPEDITION. Some say the Sherpas are exceptional Himalayan mountain guides because they have a genetic aptitude for living at high altitudes. And if you've ever met a Sherpa, you know they are also incredibly happy, warm, spiritual people.
Gravity Hills Zinfandel was named to honor the Sherpas because it's founding partner, Jean-Noel Formeaux is an avid hiker and treker. But we're all big time outdoor enthusiasts. Our CEO is a fanatical camper. Our winemaker is an obsessed fisherman and hiker. I run marathons and cross country ski. If we had our choice we'd have the office on a mountainside :) But at the very least we can use our wines to celebrate people who truly use the outdoors as their office. (That's why it's in a twist-off you know!!)

Who is the guy on the label climbing up that ice face? It's a great story! The pervious vintages of Sherpa zinfandel had another photo on the label. Then, one day as I was sitting at my desk at the winery, I got a call from someone asking about the photo on the front of the Sherpa Zin. The caller told me: " The photo on the Sherpa Zin is not actually a Sherpa . . . It's a flatlander!" How did he know this? Because the caller was a Sherpa! I talked to this guy, who's name was Norbu, several times, and then met him near his home in San Francisco. Come to find out . . .he's Tezning Norgay's son!!! Norbu promised to help me with the Sherpa Zin and the label. We asked Norbu's brother, Jamling (another son of Tenzing Norgay) to honor us with a photo of himself. Jamling has also summited Everest, and is featured in the IMAX movie "EVEREST".
So, that's who's on the label---Jamling Norgay, son of Tenzing Norgay---climbing up a very steep ice face! But even more than that, he and his brother are really great people. Where is the Sherpa Zinfandel made? Well, despite it's honoree, it's not made in the Himalayas!! I doubt they could ripen Zinfandel at Everest Base camp.
The wine is made from grapes we source on the Central Coast, near Paso Robles. It's an elegant style of Zinfandel that I love. I tell people it's a Zinfandel for Pinot lovers. Not because it's light or wimpy--it's still 14% alcohol, but it's got finesse and beauty and tenderness; it's not overwhelmed by overripe sweetness or American oak. You can finish this wine with dinner--it won't knock you hard in the forehead like a lot of Zinfandels. So you can still get up in the morning and take that hike . . .
2009 Gravity Hills "Vertigo" Chenin-Riesling

1. dizzying sensation of tilting within stable surroundings or of being in tilting or spinning surroundings.

The makers of Gravity Hills wines feel that there is no comparable pleasure to drinking a crisp bottle of white wine outdoors on a warm evening. And this particular wine was created precisely for that purpose. We chose Chenin Blanc because we wanted a fiesty wine with some snap and verve. Choosing the Delta region for our grapes made ultimate sense because nowhere else in California does Chenin show such refinement. We added Riesling for it's lovely, elusive perfume and wow, suddenly we had exactly the wine we wanted. You will see that Vertigo Chenin-Riesling is so fresh and quaffable that you will polish off the bottle before you know it. And then, friends, you might think you have vertigo yourself.