Ben Dewane and Novian Anderson never met, yet they raised their children with similar old-fashioned values. Hard work brings its own rewards, they would say. Be the best at what you do. Surrou

nd yourself with good people, and let them get to work. And nev

er, ever produce anything that wouldn't make you proud.

With such similar family backgrounds, it's no wonder Joe Anderson and Mary Dewane would eventually find each other and marry. Together, they began a journey that led them to found a winery that would make them, and their fathers, proud--proud enough that their label pays homage to the two men, Benovia.

Their journey also inspired them to assemble the best possible team of respected winemaking veterans. They recruited Bob Mosby as general manager and found the perfect partner in Mike Sullivan, one of

northern California's top winemakers, and someone who shares their passions. With Mike as coowner and responsible for the wine making, they recruited Daniel Roberts as winegrower and viticulturalist, and Tucker Catlin as vineyard development director. Then they brought on Tina Alves as operations manager, Chris Kangas as vineyards manager, and Nick Finarelli as Enologist to bring even more depth to the winery's operations. They are good people, and together they make an even better team: a team of accomplished professionals with more than 150 years of collective experience producing some of California's best wines.

"At Benovia, our team is an extension of an extraordinary family," says Joe, "a family that eats, drinks, and

breathes a lifelong passion for wine."

That passion led to the purchase of the renowned Cohn Vineyard atop a mountain near Healdsburg, where the couple lives, and led to a new winery in the heart of the Russian River Valley. The journey will continue with an exciting new Pinot Noir vineyard near Freestone, and the Martaella ranch (named after Joe and Mary's mothers), surrounding the winery itself.

Joe and Mary have invested in all the right things to make Benovia flourish-vineyards with unique terroir and a well equipped winery. But their most important investment is people.

"We see these people as the soul of Benovia," says Joe. "Mary and I trust in their passion and in what they bring to the wine. They expect a lot of themselves, and they expect it from each other. We like to call them 'Benovians.' I think our fathers would be proud of them. 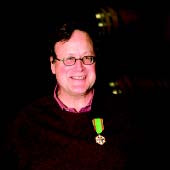 It\'s hard to believe that in the 80s I sold all the barrels and kept records all by myself. Maybe that\'s why I was nervous every time I drove by IRS headquarters here. Now I have a staff that doesn\'t keep records in a cardboard box like I used to do.

Mel
In 1972 I was vaguely thinking about attending law school or graduate school when I got a job driving a delivery truck for a huge liquor store where two college friends were running the wine department. The next thing I knew I was a full-fledged w

ine nut. From 1974 until 1981 I worked as a wine buyer for the Wine and Cheese Center of San Francisco. We ran a tasting bar with a fairly advanced tasting program. I can remember tastings of Sauternes going back to the 30s, clarets going back to the 19th century, older California wines, older Barolos and Barbarescos, German wines going back to 1937, and so on. One time we tasted every Ridge Monte Bello ever made - there were fewer examples then but it still took two days. Through this store I met a tremendous number of winemakers, tasted wines from all over the world, and learned a lot. I started selling barrels in 1980 and have never stopped.